The LSC is made up of 20 seats which have to be distributed among candidates from different lists. You can cast a list vote or a preference vote. This distinction is, however, well-hidden since you still make crosses to individual couples of candidates: if you make at least 8 crosses for candidates on the same list and no cross on any other list, then you have cast a list vote. Otherwise you have cast a preference vote.

Out of the 20 seats, 12 are distributed by majority according to preference votes and 8 are distributed proportionally to list votes. But there is a catch: list votes still consist of crosses for individual candidate pairs, and they also count as preference votes! So, if you cast a list vote, your vote has an influence on all 20 seats of the LSC, but if you cast a preferential vote, your vote influences only 12 seats. The list votes are double-counted, and they help to achieve majority in preference votes. In the end, this mechanism very effectively ensures that the list with just slightly more votes than the others (say, 35% in total), especially if these votes come from the “devoted followers”, gets an absolute majority in the LSC (e.g. 70% of seats). 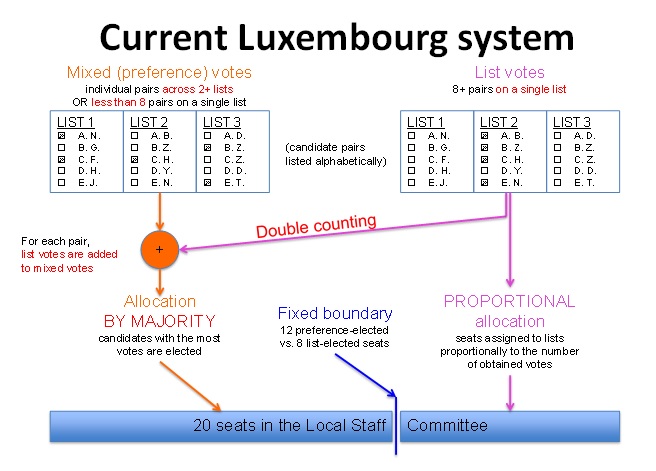 Whenever we challenge this mechanism, we always hear the argument that having a majority is good for ensuring smooth running of the staff committee. Besides a philosophical standpoint – we are convinced that a plurality of opinions is necessary to have a truly “representative” staff representation – there is also a practical consideration. The lowest possible quorum for the LSC plenary sessions is 11 people present. However, there was often a problem with achieving the quorum in recent meetings, despite your Generation2004 representatives having a very good attendance record and despite the fact that the strongest list from the 2013 elections controls 13 seats – more than enough to achieve the quorum just by itself. So, a majority is clearly not a guarantee of efficient operation.

There are other relatively minor issues, such as the lists being sorted alphabetically (so that we cannot show you who our most committed people are by putting them on the top of the list), seniority in service and higher age criterion in case of equal votes (giving preference to candidates recruited before 2004 and to should-be pensioners), and French being the only authentic version of the electoral rules.

The new LSC proposal slightly changes the ratio between “list” seats and “preference” seats: 10 seats shall be allocated by majority and 10 proportionally to lists. The proponents claim that this improves proportionality. However, this means that while actually, the number of seats distributed proportionally increases from 8 to 10, if you do not cast a list vote, the number of seats you will have influence on decreases from 12 to 10. Furthermore, the double counting still remains, so the strongest list can still achieve absolute majority.

Additionally, the LSC proposal introduces a new serious problem: If you vote for less than 10 candidate couples from one list only, your vote would be invalid (see Article 8, ‘Modalités de vote’).

There are a few other cosmetic changes, some for the better. For example, the lists can be presented in any order, not just alphabetically. Still, it is forbidden to show you by putting them on the top of the list who are our most committed people. 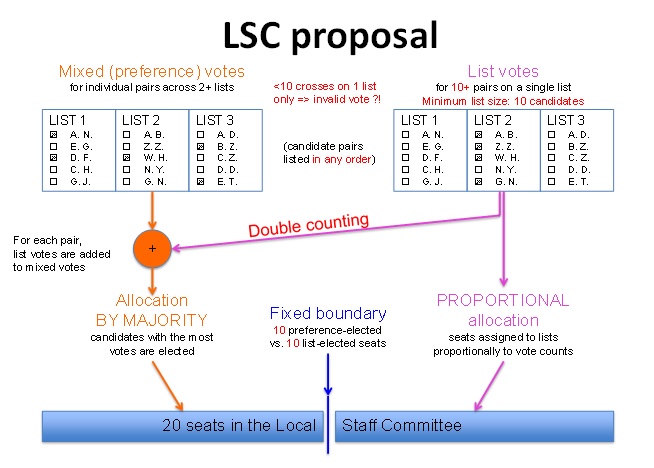 Our proposal is based on the system used in Brussels, Ispra, and maybe other sites, with eliminated paper ballots and an unambiguous “replacement procedure” (e.g. in the case that a staff category, e.g. contract agents, would not be represented). It still distinguishes list votes and preference votes; however, these two are strictly separated. There is no double-counting, and also no opacity – a “list vote” is simply a single cross for the whole list. The ratio of list-assigned vs. preference-assigned seats is determined by the ratio of votes of each type. Moreover, both types of seats are distributed proportionally with respect to lists.

As far as the minor issues are concerned, lists can be presented in any order, there is no age or seniority criterion, and all language versions are equally authentic. 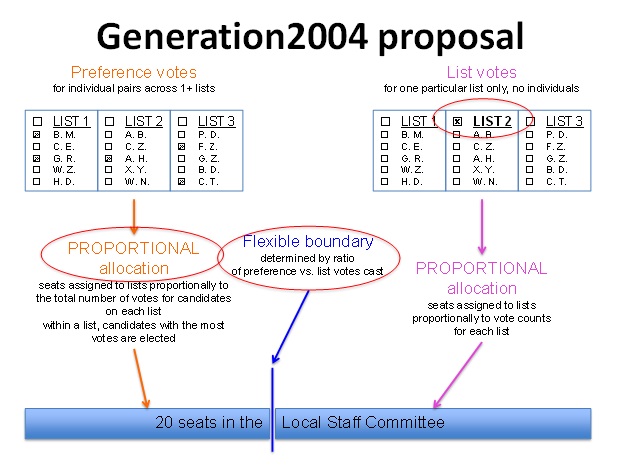 This proposal seems to be a mixture of the current Luxembourg system and the Brussels system. The list votes and preference votes are cast just as in the current system (the distinction is in the crosses), but the counting is proportional according to the Brussels rules, perhaps with some changes in marginal cases (the proposal goes into details concerning e.g. the rounding of numbers). In case of equal number of preference votes, seniority in service and age still play a role, and French remains the only authentic version.

This proposal uses “preference” votes only (and not list votes as mentioned in the LSC mail). Seats are then distributed proportionally to lists, and within each list, the candidates that have received the most preferential votes are elected. Essentially, it is the “preference” half of the Brussels system, applied to all seats. In case of equal number of preference votes, seniority in service and age still play a role, and French remains the only authentic version.

Check out our article here.