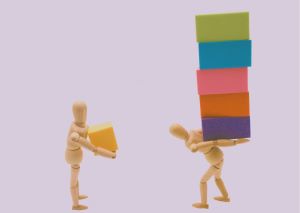 If you wonder what happened with the new Decision on Working Time and Hybrid working (WTHW) [1], here is the reply: all trade unions and staff associations (OSPs) except Generation 2004 accepted what is in the current draft and did not agree to continue the negotiations with the administration!

Generation 2004 was the only one among all OSPs to request Commissioner Hahn open a conciliation phase, the last possible option OSPs have in any negotiation with the administration [2].  This is a formal request to continue negotiations: there are too many points of disagreement still.

However, according to the interpretation of the rules given by the Legal Service, in order to use the provision on conciliation, the request must be submitted by all OSPs in unanimity!

Had all other representative OSPs also requested conciliation, a further phase of negotiations would have been opened. Based on the fact that during the many negotiation meetings that were held – including with Commissioner Hahn – several positive advances were made, we are confident that a new round of negotiations would have brought further changes to the decision, in the best interest of the institution, the staff and the people we serve.

What is Generation 2004 asking for?

In particular, we requested to continue negotiating on three main chapters:

What can we do now?

We regret to tell you that major changes to the decision are not possible without an additional negotiation round. In fact, if a conciliation phase is not opened, the decision will be approved in its current form. However, in the interests of all the colleagues who trust us, Generation 2004 remains open to a close collaboration with the other OSPs on all the phases of the process, including the drafting of the guidelines for the implementation of the decision.

That is why we made a key contribution to the joint note sent by all OSPs to Ms Ingestad, Director-General of DG Human Resources and Security, tabling a number of request for consideration in the drafting on the guidelines.

In fact, some steps forward can still be made through the guidelines that DG HR will have to put in place for the implementation of the decision and other elements that still need to be further clarified, including the scope, mandate and mission of the future Joint Committee on Flexible Working that the administration agreed to create. We requested to be closely associated also to this phase, so as to ensure that the implementing provisions go in the direction that we discussed during the previous phase of negotiation with the administration and in the direction that you have told us you want.

What are the positive outcomes of the negotiations so far?

During the last months, our deeply committed team was busy negotiating changes to the original proposal made by the administration on the WTHW decision. Here are some important improvements obtained since the first draft was presented, through many hours of meetings and countless days spent analysing the proposals, their implications, and the huge feedback we received from many of you.

What are the remaining issues?

In spite of the progress made, several challenges and risks remain. To list just a few:

We are collecting evidence of the hidden costs of teleworking in relation to teleworking. Please participate in our survey!

We urge the Commission to do the right thing, be fair with staff and contribute to our additional costs.

As always, we are eager to hear from you, let us know how this affects you!

[1] This link is to the last version available online, but this article refers to an as-yet-unpublished version.

[2] The rules for this can be found in the Framework Agreement of 2008.

[4] ‘The new legal provisions are also likely to change the way the costs of teleworking are shared between employer and remote worker. Previously, when teleworking was not mandatory, this was rarely discussed. However, there is now a growing consensus that employers should contribute to the cost of teleworking (e.g. in terms of covering Internet and electricity fees, rent, etc.) (Popescu, 2020).’ (European Parliament, 2021, The impact of teleworking and digital work on workers and society, p. 45)

‘The positive effects on cost-reductions are … proven. Employers may reduce direct capital, energy and maintenance costs, which may be shifted onto teleworkers.’ (European Parliament, 2021, The impact of teleworking and digital work on workers and society, p. 119).

‘We would like to stress that, in accordance with the survey’s conclusions, teleworking should: … receive support from the employer, so as to ensure that decent working conditions are established and that the associated costs are shared equitably’ (Permanent Delegation of Translators (DPT) note, 22.04.2021)

‘Everybody has had to find some space at home to telework and many people complained that it seems as if the Commission aims at saving money on offices by transferring the cost to its workers … People had to set up their “office” in their bedroom or kitchen; some even had to move to a bigger flat/house.’ (DPT teleworking survey, April 2021 p. 5)

This website uses cookies to improve your experience while you navigate through it. These cookies are all categorized as necessary and are automatically stored on your browser as they are essential for the working of basic functionalities of the website.
Necessary Always Enabled
Necessary cookies are absolutely essential for the website to function properly. These cookies ensure basic functionalities and security features of the website, anonymously.
SAVE & ACCEPT
Powered by